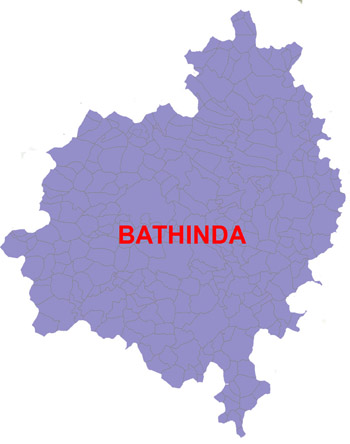 Bathinda is one of the historical and important towns of North India. It is associated with the imprisonment of Razia Sultan in the Fort, which is more than 1800 years old. It was also called Wahtinda and Bitunda which finally become known as Bhatinda. But its name was changed to Bathinda on the authority of Survey of India to conform to the phonetical expression as locally pronounced. Bathinda district is situated in the southern part of Punjab State in the heart of Malwa Region, and is located between 29°-33’ and 30°-36’ north latitude and between 74°-38’ and 75°-46’ east longitude on the globe.
The district is surrounded with Sirsa district of Haryana state in the south, Barnala and Mansa district in the east, Moga in the north and Faridkot and Mukatsar in the north-west. The district has eight towns, namely Bathinda, Rampura Phul, Maur, Raman, Bhuchu, Goniana, Kotfateh and Sangat and one census town (Bhisiana). The distict has been divided into 3 sub-division at Bathinda, Talwandi Sabo and Phul, which are further sub-divided into 8 development blocks namely Bathinda, Sangat, Talwandi Sabo, Nathana, Rampura, Phul, Bhagta Bhai Ka and Maur. The district comprises of a total of 292 villages (includes 7 Municipal Councils Sangat, Raman mandi, Maur, Kotfatta, Rampura, Bhucho Mandi, Goniana and 1 Municipal Corporation Bathinda and 5 uninhabited villages) 305 Gram Panchayats and 9 Market Commitees operating in the district. The headquarters of the district are located at Bathinda.Map of district Bathinda is shown in figure 2.1.
General Statistics
1.Socio- Economic & Demographic Information Social and economic profile of households of different blocks in the district The data related to socio-economic and demographic features as given in the table 2.1.2.1 indicates that the total population of the district is 871652 as a whole. The Maur block has a minimum population i.e. 81782 whereas the maximum is accommodated in the Bathinda block which is 171499. This population is residing in 140380 houses out of which 50769 houses are occupied by scheduled castes and 51163 houses by landless labourers. The total farming families are 86167 and out of these 4860 farming families are marginal and small having less than 2 hectare land holding, which indicates the dire need for making efforts for cooperative farming to make agriculture a profitable venture.