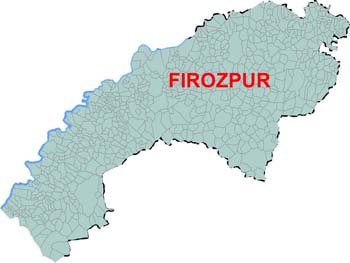 Ferozepur , one of the border districts, lies in the South West frontier of Punjab and is bounded by districts Muktsar, Faridkot and Moga in the east, districts Jalandhar, Kapurthala in NorthEast and district Amritsar in the North.It shares the Southern boundry with Sri Ganganagar district of Rajasthan state.The North-Eastern, Northern and Western side of the district is bounded by river Satluj. Ferozepur is the biggest district of Punjab state with 9.58 percent area of the state under it.Geographically, the district is 220 km lengthwise and 30-40 km width wise.The river Satluj also has head work at Hussainiwala which was constructed in 1927 for taking the water of the river to Sri Ganganagar district of Rajasthan.

There is Samadhi of the great martyrs of the country Bhagat Singh, Rajguru and Sukhdev nearby. There is also a gate at the Indo-Pak border near Hussainiwala where an impressive ceremony of beating retreat is held every evening. Ferozepur is one of the oldest railway stations with broad guage connecting Ferozepur with Mumbai, Delhi, and Jodhpur and Bathinda.Ferozepur district comprises of 5 sub-divisions namely Abohar, Fazilka, Jalalabad, Ferozepur and Zira and 10 Community Development Blocks namely Abohar, Fazilka, Ferozepur, Ghall Khurd, Guru Har Sahai, Jalalabad, Khuian Sarwar, Makhu, Mamdot and Zira. It lies between 30 and 58 North latitude and 74 and 37 in the East longitude. According to 2001 census, the population of district Ferozepur is 1746107 with 926224 male and 819883 female members. Rural population of the district is 1295382 ( 74.19% of the total population).The sex ratio in the district is 883 against 874 in the state. There are 200760 cultivators, 166853 agricultural labourers, 14330 household industry workers and 265816 other workers in the district. Overall literacy rate in the district is 61.42 percent. In rural area, the overall literacy rate is 55.75 percent which is 64.78 percent for males and 45.78 percent for females.About one fifth of population of the district belongs to schedules castes and the overall literacy among scheduled castes is 50.48 percent . The people within the border belt are by and large backward and illiterates. There are 308 post offices 9 telegraph offices, 145 telephone exchanges, 3184 public call offices, 106381 telephone connections in the district. Total road length in the district is 4536 km and 98.2% villages of the district are linked with roads. On average there is 86 km road length for each 100 sq km area of the district.