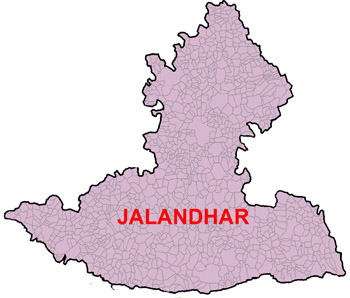 The Jalandhar is occupying 5.3 % of the total Geographical area of the State. It is considered as one of the larger and densely populated District of Punjab State and is a part of Prosperous Doaba Region. The District lies in the heart of the State and is situated between the River Satluj and Beas. The District was a part of vast area covered under the Indus Valley civilization during the early period of the History. In ancient time the district comprises the whole of the upper Doabas from the Ravi to the Sutluj. The District Witnessed an industrial revolution during the post partition years as a large number of migrants from the eastwhile Punjab settled here and started industrial activity as their profession.

The Jalnandhar District which has major road and rail connections, is a market for agricultural products.. It is at a distance of 350 Kms from Delhi on Delhi-Amritsar Highway. It is surrounded by Ludhiana district in East, Kapurthala in West, Hosiharpur in North and Ferozepur in South. It is well connected by road and train. Nearest Airport is RajaSansi Airport, Amritsar at a distance of 90 kms.

2.1.2 Agro climatic Zones and Soil Type
Out of Six Agroclimatic Zones of Punjab the whole of the Jalandhar lies in the Central Plain Region. The land of the District is covered by the alluvial Deposits of the Indus - Ganga.The District has Sub Tropical monsoon type climate with normal rainfall 600mm. 2.1.3 Main subsidiary occupation of the District

The main subsidiary occupation includes Dairy, followed by Poultry, Fishry and beekeeping. The commercial dairy farm in the Districts are 550, Poultry are 34, Fishry is on 527 Hectares and Bee keeping is occupied by 109 farmers of the Distric