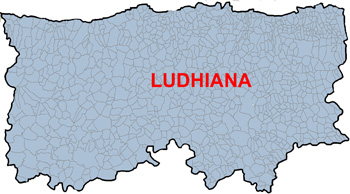 The total geographical area of Ludhiana is 3767 sq km, which is divided into the flood plains of the Sutlej and upland plain area. The average rainfall of the district is 544 mm. The agricultural productivity is very high in the district which has been achieved with assured irrigation, use of HYV seeds, good infrastructural support provided by Punjab Agricultural University, Ludhiana, GADVASU, Department of Agriculture and other agencies.

The water table is going down at an alarming rate in Ludhiana district and even more seriously around the Ludhiana city blocks. There are 72000 operational holdings of whom, 1/3rd are the small and marginal ones of less than 2 ha. Ludhiana is an industrial town with about 15 Lac populations, which is a large domestic market for agriculture produce, in a range that goes up to the significant proportion of luxurious consumers.There are seven sub-divisions i.e. Ludhiana (East), Ludhiana (West), Samrala, Khanna, Payal, Raikot and Jagraon. The district has been divided into 12 bocks i.e. Ludhiana (East), Ludhiana (West), Machhiwara, Samrala, Khanna, Doraha, Dehlon, Pakhowal, Raikot, Sudhar, Jagraon and Sidhwan Bet.There are two Improvement Trusts in the district i.e. Ludhiana and Khanna. Ludhiana district has six Nagar Councils namely Samrala, Khanna, Doraha, Payal, Raikot and Jagraon. There are four Nagar Panchayats i.e. Machhiwara, Sahnewal, Malaud, and Mullanpur-Dakha.There are 915 fully electrified and well connected villages with all weather roads out of which 897 villages are inhabited and 876 elected Panchayats.