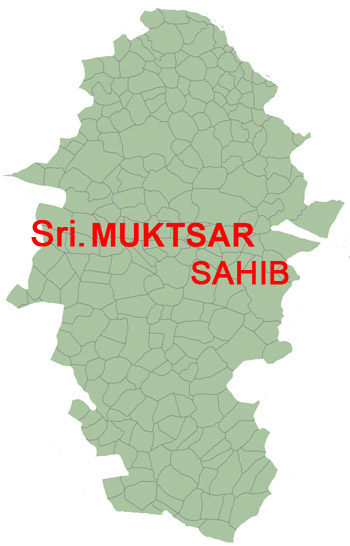 The total geographical area of district Muktsar is 2,63,393 hectares. Out of which 2,42,989 ha area is cultivable and irrigated area of the district is 2,20,690 hectares. Cropping intensity of the district is 175%. It touches Bathinda in the South, Faridkot in East and Ferozepur in North-West directions. It is connected with Kotkapura-Fazilka railway line. he total number of blocks in the district are four namely Muktsar, Malout, Gidderbaha and Lambi having 236 Villages. Some area in blocks Lambi and Gidderbaha of the district is unirrigated but the farmers turned it to productive by efforts of their hard work.
The Agricultural Department played a great role in this laborious cause. Block Gidderbaha moved to Agriculture diversification tracks by growing aromatic plants while block Muktsar and Malout produced a high quality cotton & paddy. Malout is also famous for developing modern/improved Agricultural implements.
About 95% area of district is irrigated through canal and rest of area through tubewells. The main crops grown in Kharif are Cotton, Paddy, Moong etc. and in Rabi are Wheat, Barley, Raya and Gram. There is orchard plantation of grape, Kinnow and Guava.Block Muktsar is the largest block of the district while the block Lambi is the smallest. According to 2001 census, total population of district Muktsar is 7,76,702 which is about 3% of the state's population. Population of females is 3,64,981 where as males is 4,11,721 According to census 75% of population living in villages while other 25% in cities and towns.Cattle is the main animal wealth of the district and have 2,88,964 total population of animals. There are 43 veterinary hospitals and 64 veterinary dispensaries and one polyclinic with diagnostic facilities at the block level in the district. It has 4 milk chilling centres. There are 4 regulated markets and 27 subyards for purchase of agricultural produce in the district. Punjab State Marketing Board has developed a yard on each and every focal point. The main purchasing (Agricultural Produce) agencies are FCI, Markfed, Punjab Agro, Food supply department and CCI in the district. In the district there are 88 bank branches out of which 59 are commercial banks. 70% of total population depends upon agriculture in the district. Owing to agriculture based district, there is a big scope of agro based processing industry